Warning: count(): Parameter must be an array or an object that implements Countable in /nfs/c07/h03/mnt/178353/domains/unfitforpublication.org.au/html/plugins/system/gantry/gantry.php on line 406
 1st Edition, 2007 - Unfit For Publication

The inspiration for this project was Robert French’s keynote address at the 5th Homosexual Histories Conference at Newcastle from Monday 28th October 2002, although it has gone through quite a number of evolutionary stages since then. One of Robert’s main points was that there was still a lot of Tasmanian gay and lesbian history to be recorded and I thought, “Well, perhaps that’s something I could do!” Having just completed the NSW Gay and Lesbian Immigration Task Force’s history and archive project I was looking for something new. After Robert’s paper I asked him to tell me where I might start looking for the unrecorded Tasmanian gay and lesbian history. He said he could certainly give me a starting point and took me over to his attache and he handed me a five page list of sodomy and buggery cases which had been tried by the Tasmanian Supreme Court. (Robert French is extremely well organised!) The list commences in 1828 and concludes in 1921. The 1828 case would have been fairly soon after Van Diemen’s Land was established as part of the Colony of NSW.

So at first this was intended to be a Tasmanian project. Early in 2003, I visited Tasmania for the Ten Days on the Island festival and thought during the ten days I was there I would spend a day at the Tasmanian State Archives in Hobart, to check the feasibility of finding details of the cases from Robert French’s list. My initial investigation showed that it was most certainly possible to find all the details of the cases and record them. On my return to Sydney I realised there would be very similar cases which had been heard by the Supreme Court in NSW.

The difficulty about doing a Tasmanian project was that the only way to gain access to the documents was to be at the State Archives there. Living in Sydney created some difficulties! I did investigate renting a place for a period to research the cases but that was too difficult. So I went to the State Records New South Wales (SRNSW) and indeed discovered that quite a number of cases had been heard in the NSW Supreme Court.

The NSW Supreme Court commenced operation in 1823. With the assistance of staff at SRNSW in Sydney I found earlier cases which dealt with unnatural offences, bestiality, buggery and sodomy, which were heard in the Court of Criminal Jurisdiction. The very first case was in 1796. I thought therefore that it was important to go back right to the beginning of white settlement in Australia. 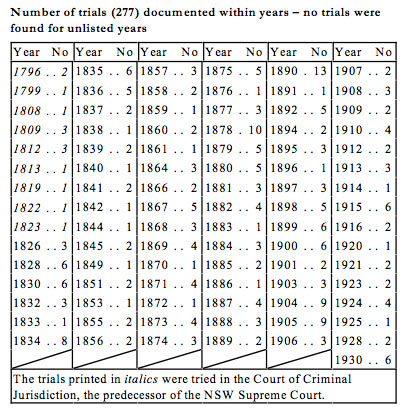 It should be noted that not all bestiality cases which were tried before the NSW Supreme Court have been transcribed. During the early part of the documentation they were included in the belief that there might not be enough cases to be significant. Later on I felt that the greater value lay in just including the buggery, sodomy and unnatural offences cases.

As I continued with the project I found the Macquarie University Law School’s web-site which catalogues the decisions of the superior Courts of NSW, 1788-1899. While looking at those decisions I discovered that they sometimes included judges’ notes and newspaper coverage of the cases. That made my project evolve a step further and I started to look forthose similar materials to be included in my documentation of the cases. I found there were quite a lot of the judges’ notes available at SRNSW. The newspaper coverage, particularly for the Sydney metropolitan area I found at Fisher Library, University of Sydney, which has a very good microfilm collection of the early Sydney newspapers on open access.

Later on the Circuit Courts (of the Supreme Court) used to travel to certain towns within NSW and I was able to find early newspaper records of those Circuit Court hearings as well.

Peter Bonsall-Boone transcribed all the cases, included in these volumes, I dictated at SRNSW.

On a number of occasions when I spoke to various people about the content of the project they assumed that most, if not all, documentation contained in these volumes is available via the Internet. They were astounded to learn that every piece had been obtained from original manuscripts, dictated and transcribed word for word.

The judges’ notes of the cases were somewhat more difficult to deal with. They were handwritten, in haste, in small books which the judges, or their associates wrote, during the hearing of the case. These judges’ notes had to be photocopied and I was trying to find someone who would be happy to transcribe them for me. Fortunately a close friend in Melbourne, David Conolly, during the early period of the project had indicated that he found the subject fascinating and asked me if there was something he could do to help the project along. When I came across the judges’ notes I approached David and asked him if he would be willing to transcribe them. He agreed readily, although I don’t think he knew what he had let himself in for! As it turned out the handwriting found in some of the judges’ notes was absolutely appalling and almost impossible to decipher. However, David’s love for original historic documents is so great that he persevered and at one stage he was able to break the code of one of the judges who used what appeared to be a very early form of Pitman Shorthand. David has transcribed some two hundred and nineteen judges’ notes pertaining to the cases.

As far as newspaper coverage was concerned there was not a great deal of difficulty because I could either go the NSW State Reference Library or to the Fisher Library and photocopy the particular parts of the newspapers and type them up myself for inclusion with the documents.

As I continued with the project and got further into it (chronologically, that is) it puzzled me why fewer of these offences were tried in the NSW Supreme Court. Because the Colony’s population had increased over the years it could be expected that the number of cases would increase also. As it turned out there was a shift to try these cases in a lower court, namely Quarter Sessions. Unfortunately few manuscripts of Quarter Sessions Courts have survived. 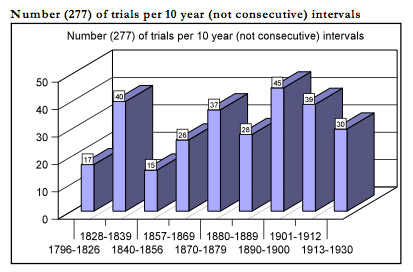 I spoke to others, particularly those at SRNSW. It was then that I discovered the NSW Police Gazette, which is a weekly publication commencing in 1852. Because I wanted the Unfit for Publication document to be as comprehensive as possible I felt it necessary to start creating a database of materials I had found in the NSW Police Gazette. The alleged offences I
was researching were listed amongst all the other offences committed in the Colony and they appeared to be very detailed. They, for example, cover the initial apprehension, then later the trial details. If the offenders are convicted and go to gaol a record will appear under “Prisoners Discharged Free”. The latter gives an enormous amount of detail, like date of birth, where born, height, colour of eyes and hair, etc. Thus my ambition to have as complete a picture of the offences right from the beginning of white settlement to 1930 certainly became a reality once I had discovered the NSW Police Gazette. The inclusion of the Gazette’s lists of offences has resulted in details of some 2,500 offenders who were not tried in the Supreme Court of NSW, included in Unfit for Publication’s Appendix A.

A number of other offences, apart from bestiality, buggery, sodomy and unnatural offences, namely, a) absconding of boys from either their indentured apprenticeship or charged under the Industrial Schools Act; and b) indecent exposure – his/her person, and indecent behaviour, have been included in the Appendix.

The reason for inclusion of absconding offences, is that it was felt that these boys could be vulnerable to making contact with adult sex offenders which could lead to their being implicated in sexual offences. Furthermore, the possibility of these boys being repeat offenders, not necessarily of the same offence, was explored but was found wanting.

The inclusion of indecent exposure and behaviour in the Appendix was deemed advisable where the gender of the victim was ambiguous. In other words the exposure and/or behaviour could have been perpetrated against a person of the same sex.

The cut off date, 1930, was chosen because quite a number of records have restricted access of seventy or seventy five years. Apart from that, I thought that going up to 1930 would make a very good sample and overview, and a vast amount of statistics for those who are interested.

In the earlier years of the Colony the NSW Police Gazette had approximately 250 pages to cover a whole year. This made it relatively easy to go through page by page to find the particular crimes I was looking to document. As time went by of course the population grew, the crimes overall increased and it became somewhat more difficult in terms of time to go through all the police gazettes, which had tripled in size. Fortunately another very close friend, Peter Trebilco, was willing to do the reconnaissance of the Police Gazette. By that I mean he would go through page by page, pick out the relevant cases, type the necessary references for me to enter the complete details at a later stage.

By now, because of the intense involvement of Bon, David, Peter and myself, I euphemistically called us all working together ‘the four old buggers’ project’.

The reasons for preparing this publication is that, like all the other work and research I’ve done it has always been with a belief that it is important to make a contribution and to bring to the forefront a part of our history – gay and lesbian history.

This publication does not use words like gay, lesbian or homosexual, although most of the cases covered concern same-sex males’ activities.

The documentation of our history has to me always been a very important aspect. Although victories or celebrations are seldom part of this history, it’s important that it is put on record. There is so much recorded history concerning other groups of people, but I feel that same-sex history is a very much neglected subject. A further reason is that the production of this researchers’ resource, covering such a lengthy time period, is a useful and important resource for future enquiry. The final reason for doing this project was to produce a sociological, legal and historical publication which can be used, in a large variety of ways, as a foundation for future research.

The 270-odd cases recorded verbatim here, cover a very wide spectrum of emotions ranging from sadness, humour, violence, to compassion and even love.

I hope these documents will intrigue energetic family, general historians and future researchers to use this same-sex researchers’ resource to extract those particular parts that tickle their fancies.