Warning: count(): Parameter must be an array or an object that implements Countable in /nfs/c07/h03/mnt/178353/domains/unfitforpublication.org.au/html/plugins/system/gantry/gantry.php on line 406
 1830, William Augustus Forsyth - Unfit For Publication
Text Size

In the Eleventh Year of the Reign of
Our Sovereign Lord George the Fourth,
by the Grace of God, of the United
Kingdom of Great Britain and Ireland,
King, Defender of the Faith.

[On the reverse of the above is the following]

The King v. William Augustus Forsyth
Indicted for a misdemeanor for an assault upon James Roach(e) on
4 April with intent to commit burglary [sic–buggery]
at Maitland

I am in the employment of Mr [Lionel] Hay’s on board the St Michael. He was in the same employ on board the St Michael … I was in the kitchen on shore on the night of Saturday the 4th April. The prisoner & I slept in the kitchen in the same bed. I was reading a book at the table & the prisoner brought both the beds & made them together alongside. This was unusual. After he made the beds I laid down & got up again. I left off reading & he went out.

I went to bed & he came in again. I went to sleep. Between one & two in the morning I was awoken by this man. He was attempting to bugger. I was lying on my side. My back was towards him. This man woke me by attempting to bugger. His private parts they were near my private parts too. When I saw that I rose & struck him. His private parts were to my backside. I got up & struck him & I (?). I said he must be no man at all to attempt such an action as that upon me. I dragged my blanket to the fire & sat upon it. This was in the kitchen. I sat there as good as three minutes arose. I said if I

could not find rest then I would see & go on board the Jessie & see if he could not sleep there. He told me that I need not go & scandalise him there then – there was time enough to do that in the morning. I told him for that reason I’d go – I then took up my blanket & went to the wharf. I went into a boat, & was (turning?) it when Mr Hays came over the cabin locker, (finding ?) me in the boat. He asked who I was. I told him it was me – & I told him the cause. He had not committed his intentions. – As soon as I woke I got up. 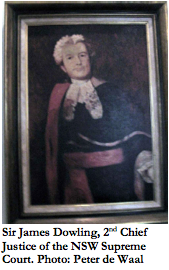 Cross-examined. The prisoner did not sleep close. There was not another man in the hut this night. I told the magistrate I had a suspicion of the prisoner & that I moved on the other side. – I raised no objections to lying in the same bed. – I recollect that the prisoner & I had a quarrel on the Thursday. This man called me a son-of-a-bitch – He attempted to strike me, but there were some men in the kitchen prevented. I am a native – & 16 years of age. I recollect Harry on board. Mr Hay was determined to make me come forward – & Harry told me I had best go & get a constable. Mr Hay

would not drop it. I don’t know whether Harry & the prisoner were not on the best of terms. I recollect the prisoner making a complaint against Harry respecting the iron pot.

I have charge of the St Michael store ship in Hunter’s River agent for (Rapsey?) & Mitchell. I was sleeping on board the St Michael. I heard somebody jumping into one of the boats & on hearing that I immediately got out of bed & sang out “Who’s that in the boat?” I was answered by James Roach. This was between one & two on Sunday morning. I asked him what he was doing in the boat at such an hour. He said he could not sleep in the kitchen. He

must go to sleep in the Jessie. I asked him why. He said the prisoner was taking improper liberties. I told him not to be afraid – & he answered that (–) had been attempting to commit an unnatural offence upon him – I had known Roach three or 4 days before. I hired him myself. I knew a little of his father a constable. – The parents live on Dillon’s farm.

Cross-examined. I recollect the prisoner making a complaint of a man named Harry respecting the pots & kettles. The prisoner had been on the road gang when he came to me.

Prisoner rather at a loss – notwithstanding on my suspicion – He said of that character – no objection – I made enemies. – Mr Campbell

Mr [Lionel] Hay I received a good character with this man from Mr Campbell – He was employed as a labourer.

Patrick Campbell I am assistant Surveyor of Roads. I have known the prisoner 12 or 18 months. Has been employed as an assistant overseer. He behaved himself generally to my satisfaction – I never heard anything against him. I always believed him a decent man in his moral habits. He is an (?). Bow Street Runner.

Prisoner: I had sole charge of the men.

The Jury retired & on return find prisoner – Guilty
[Sentence] one year on the roads – in irons.

The Sydney Gazette and New South Wales Advertiser, Thu 6 May 1830  4

The prisoner was found guilty, and sentenced to work on the public roads in irons for 12 months.

The prisoner after sentence petitioned to be removed to a distant gang.

3  Sir James Dowling born in London 25 Nov 1787 became the second Chief Justice of the NSW Supreme Court after Justice John Stephen. ‘He went to St Paul’s School, London, and then became a parliamentary reporter until he was called to the Bar in May 1815. He arrived at Sydney in the Hooghly with his wife and six children on 24 Feb 1828 and next day was sworn in.’ In 1829 Dowling presided over the first NSW Supreme Court circuit at Maitland in Union Inn which also served for the purpose of public worship, justice administration and wearied travellers. ‘On 27 Jun 1844 the chief justice collapsed on the bench … and had another relapse and died on 27 Sep 1844’ before he could undertake a long sea voyage and change of climate. ADB, 1788–1850, vol. 1, pp. 317-20.

Warning: "continue" targeting switch is equivalent to "break". Did you mean to use "continue 2"? in /nfs/c07/h03/mnt/178353/domains/unfitforpublication.org.au/html/modules/mod_accordeonck/helper.php on line 90